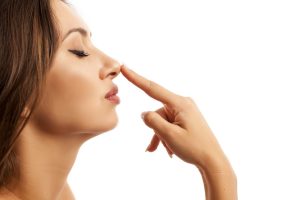 Rhinoplasty, also known as “nose reshaping” or a “nose job,” can improve the appearance and function of the nose. From the bridge and nostrils to the tip and overall profile of the nose, nose surgery can correct a variety of aesthetic concerns. Those with breathing problems stemming from structural issues within the nose can also benefit from nose surgery.  Rhinoplasty surgery is a passion and focus at Graham Plastic Surgery. In addition to being an experienced surgeon, Board Certified by the American Board of Plastic Surgery, Dr. Graham has had advanced training in rhinoplasty. He has attended the world-renowned advanced Dallas Rhinoplasty Course on two occasions and he is a member of the Rhinoplasty Society of Europe, gaining him access to advanced training and perspectives from rhinoplasty surgeons around the world. As a result, Dr. Graham has the knowledge and techniques from the best rhinoplasty surgeons from Iran, Egypt, Turkey, Italy, France, Portugal, Columbia, United Kingdom, and Russia.

Rhinoplasty candidates include anyone who doesn’t like the appearance of his or her nose.  Many patients have a dorsal hump on their nose that can make the nose more masculine “My Father’s Nose”. Some people simply don’t like the roundness of their nasal tip.  Some feel that their nose hangs to low or is turned too high.  Some people feel their nose just isn’t straight.  All of these deformities can be corrected via rhinoplasty. Rhinoplasty achieves the following:

Facial balance: Whether you feel your nose is too large, too wide, asymmetrical, or has an unattractive angle, nose surgery can improve the size, shape, and overall appearance of your nose. Rhinoplasty will help balance your facial features by creating a nose that is in better harmony with the rest of your face, which can increase your confidence and improve your overall quality of life.

Improved breathing: Rhinoplasty can correct and relieve airway obstructions within the nose, such as a deviated septum or enlarged turbinates, to allow for normal, easier breathing. This procedure can alleviate sensations of congestion and other breathing problems related to the nasal passageway to provide you with improved comfort during your everyday life.

Before & After Photos View Gallery

Dr. Graham performs an open rhinoplasty procedure. Open rhinoplasty surgery begins with an invisible incision on the undersurface of the nose.  The nose soft tissue is then elevated as the underlying cartilage and bone is exposed.  This cartilage and bone is then delicately reshaped to give a more aesthetic look to the nose.  Through several specific techniques the nose can be made to look longer, shorter, wider, or narrower.  Often times the most requested changes are to remove a dorsal hump, make the nose straighter, and make the tip smaller. In rhinoplasty surgery every millimeter counts, and it is the attention to detail that only an open rhinoplasty approach can provide.

Will insurance pay for my rhinoplasty?

Insurance companies may cover the cost of a rhinoplasty if it is performed to correct a structural problem that impairs breathing. However, Dr. Graham no longer will perform a rhinoplasty under insurance.

What are the risks associated with rhinoplasty?

What is the recovery time following rhinoplasty surgery?

This is dependant on the type of work you perform.  Many patients with office jobs only require a week after rhinoplasty.  During that first week both an internal and external nasal splint will be in place. You will most likely also have some bruising around your eyes. After the first week you can return to work, but likely with some bruising, although makeup will cover the majority. However, patients who perform heavy labor may require 2-4 weeks to recover.You may drive when you are off narcotics and feel confident to control the car, even in an emergency.  Most patients are able to drive within 1-2 weeks.

What is a liquid rhinoplasty?

A liquid rhinoplasty refers to performing nasal reshaping using fillers such as Restylane, Juvederm, or Radiesse. This can help shadow a dorsal hump or refine a tip. This may be a more economic option for some patients, although the results aren’t permanent.

How much does rhinoplasty surgery cost?

The average cost of rhinoplasty in the US is $6-7000. Dr. Graham’s pricing for rhinoplasty can be found here.