WHAT IS CUBITAL TUNNEL SYNDROME? 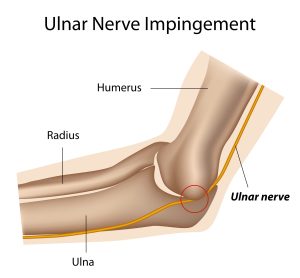 WHAT ARE THE SYMPTOMS OF CUBITAL TUNNEL SYNDROME?

Unlike carpal tunnel syndrome, which affects the thumb and first 3 fingers, in cubital tunnel syndrome people often complain of numbness and tingling in the ring and small fingers.  Often the numbness and tingling occur at times when the elbow is resting on a hard surface or during activities that require elbow flexion.  As the ulnar nerve also innervates muscles to the hand, one might also note a decrease in grip strength.

HOW IS CUBITAL TUNNEL SYNDROME DIAGNOSED?

In our practice cubital tunnel syndrome is most often diagnosed by history and physical exam.  On occasion, a nerve conduction test will be ordered to confirm the diagnosis.  However, as this test is uncomfortable and inaccurate we try to avoid this testing.

WHAT IS THE TREATMENT FOR CUBITAL TUNNEL SYNDROME?

In most cases, the initial treatment is nonoperative.  A trial of elbow pads and activity modification is tried at first.  However, often these modalities fail and surgery is required.

WHAT DOES CUBITAL TUNNEL SURGERY INVOLVE?

WHERE IS THE SURGERY PERFORMED?

Cubital Tunnel surgery is performed as an outpatient in either a hospital or surgery center. For those with high deductible insurance or without insurance, ulnar nerve release can be performed safely and comfortably in an office surgery suite.

WHAT ARE THE MAIN RISKS OF THE SURGERY?

WHAT IS THE RECOVERY TIME AFTER CUBITAL TUNNEL RELEASE?

This is dependent on the type of work you perform and whether the nerve needed to be relocated.  Many patients with office jobs only require a few days.  However, patients who perform heavy labor may require 4-6 weeks to recover. You can drive within a few days when you are off of narcotics.

FILL OUT THE FORM BELOW TO SCHEDULE YOUR CONSULTATION! 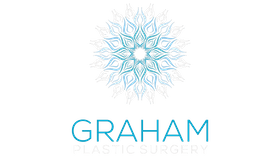